#51 Design, development, and evaluation of pyrazoline based mycobactin analogues as anti-tubercular agents: An in-silico approach

As evidenced by the WHO database, the pathogenicity and virulence of Mycobacterium tuberculosis have increased its infectiousness, making it a fatal disease causing a global health crisis. One of the vital health aims of the United Nations sustainable development goals is to eradicate tuberculosis by 2030. The rise in multidrug-resistant tuberculosis (MDR-TB)/ drug-resistant tuberculosis (XDRTB) cases has pushed scientists to create new chemotherapeutic agents with distinct mechanisms of action as the current medications seem to be ineffective to some extent. In this perspective, we have employed the concept of “conditionally essential target” (CET) based drug design because, over the years, mycobacteria have evolved machinery by which they can survive in the host. Therefore, it is of utmost importance to target specific enzymatic machinery that seems essential for mycobacteria’s survival. As per the current review by our research group (Shyam et al. 2021), the mycobactin biosynthesis pathway (MBP) might be a prospective therapeutic target in combating tuberculosis. Mycobacteria take up mycobactins (siderophores/iron chelators) when they face iron-deficient conditions, i.e., up-regulation of the MBP. This makes MBP a promising endogenous target for identifying new lead molecules. Therefore, we aim to design and develop mycobactin-mimicking compounds by retaining the structural features of mycobacterial siderophores in anticipation that it might cause inhibition of the siderophores biosynthesis enzymes resulting in the arrest of bacterial growth under iron deprived conditions. Herein, we focus on exploring pyrazoline based mycobactin analogues (non-specific mycobactin biosynthesis inhibitors) targeting MbtA enzyme (1st step of mycobactin biosynthesis). Following our prior studies described by (Stirrett et al. 2008) and (Ferreras et al. 2011), we now wish to look into the structural diversity of the previously found active compounds with a hope of finding a more potent analogue showing high affinity for MbtA (adenylating enzyme) in the in-silico exercise. Hence, we designed a small library (12 molecules) of mycobactin analogues keeping the necessary scaffold (diaryl-substituted pyrazoline (DAP)) intact and assessed their in-silico stability using molecular docking simulations (AutoDock 4.2.6) and molecular dynamics simulations (GROMACS). To find the binding modalities and inhibitory profile of the proposed compounds, they were docked in the active site of the MbtA receptor (by analogy with the homologous structure PDB ID: 1MDB). The lowest energy conformation of each docked ligand (best score) was visualized in BIOVIA discovery studio. The six top-scoring compounds were evaluated for their ADMET (absorption-distribution metabolism-excretion-toxicity) profile using SwissADME and pkCSM web server. The best molecule which revealed a good ADMET profile was taken up for MD simulation study (50 ns). Results revealed that the designed compound GV08 (-8.80, 352.58 nM), GV09 (-8.61, 499.91 nM), GV03 (-8.59, 508.51 nM), GV07, (-8.54, 553.44 nM), GV02 (-8.53, 563.30 nM), and GV04 (-8.26, 878.26 nM) had good docking score and inhibition constant. Of these GV08 and GV09 showed a good ADME profile with all major parameters lying in the acceptable ranges. They also showed the least toxicity with no hepatotoxicity and skin sensitization. MD simulation studies of GV08 also suggest that the protein-ligand complex is stable throughout the simulation. The future scope invalidates these findings through synthesis, characterization, and intracellular activity. 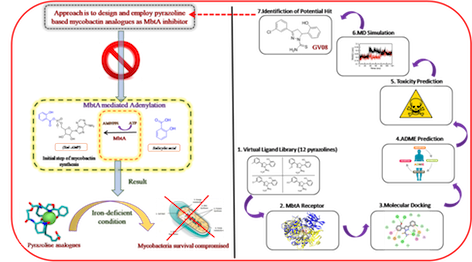 This work is licensed under a Creative Commons Attribution-ShareAlike 4.0 International License.

Most read articles by the same author(s)

Obs.: This plugin requires at least one statistics/report plugin to be enabled. If your statistics plugins provide more than one metric then please also select a main metric on the admin's site settings page and/or on the journal manager's settings pages.

You may also start an advanced similarity search for this article.